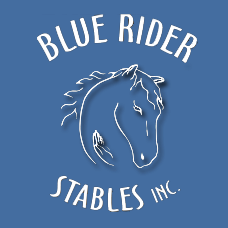 Our Head Riding Instructor, Becky, had the amazing opportunity to be interviewed for an article in The Berkshire Edge about Blue Rider Stables. Here are some snippets from the article:

“I’ve been in the horse industry for 30 years, and I’ve never seen any place like this.”— Becky Daddona, head riding instructor at Blue Rider Stables.

A new brand of riding stable is born

Blue Rider Stables Inc. (BRS), a non-profit organization founded in 1991, offers “a holistic educational environment in which people and animals can safely interact, and through their mutual therapeutic experiences, broaden the scope of their lives.” There the horses serve as therapists and instructors, and the guides serve as mediators.

Located down a dirt road (15 Farm Lane) in South Egremont, Blue Rider Stables is a beautiful oasis with lush green pastures, an open-space riding arena, and a stall-free barn. All 18 equines that call Blue Rider home are free to roam the common spaces, allowing easy movement among the humans and horses.

Blue Rider Stables evolved in part from the philosophy of Rudolf Steiner, Austrian educator and founder of The Waldorf Schools and formulator of anthroposophy—a formal educational, therapeutic, and creative system that seeks to optimize physical and mental health and well-being by natural means.

One of our long term riders, Khali Zabian, spoke at our Gala Event in December 2022. Here is her speech about what Blue Rider has done for her.

Blue Rider has changed the way my daughter looks at therapy. Her life has been therapy, and needing to do what a multitude of people tell her, with little joy for her. She has been through such a life full of struggles and riding has changed her, giving her freedom of movement and the control of something while actually having fun. Sometimes this is the only thing she will get out of the house for. The staff noticed that I myself needed the help as well, as I have severe anxiety and back pain, depression and insomnia due to my daughter’s condition. I look forward to going to Blue Rider Stables each week. Christine, the other instructors, and the horses not only help put a smile on my daughter’s face but mine as well. Having time to focus on myself erases tensions I don’t even know I hold, and lets me breathe. There is the added bonus of doing something enjoyable with my daughter, even though it is hard work. Depression and the stress of everyday life is always put on hold when at Blue Rider. I thank them for all their support.

A huge THANK YOU, not only for the regular sessions that have undoubtedly improved my mobility and strengthened me, but for what they did to rehab a recent, new, debilitating back injury.  There is no question that what you did with Falcur and me markedly improved my mobility, pain level and my confidence with regard to what I could do with my body. I showed up, practically immobile, and left Blue Rider after our session, able to drive, turned my body freely and safely and felt so much better.  The work you both did with Falcur and me is unquestionably why I got so much better so quickly. As someone who has typically relied on “traditional” methods, I am grateful for the work you do and the care, gentleness and individual attention with which you do it. Thank you!!

I try to spend once a week recentering with Billy Boy and others who may join in, a friendly Icelandic hen named Buckbeak, a very soft and beautiful Tortoiseshell cat named Pesto and of course Taquito who goes wherever Billy goes. Think back – remember your most peaceful and relaxing vacation, when all your worries and stress were gone? That’s how recentering at Blue Rider makes me feel. Oh!?? What was I stressed out about today? Hmmm? Time to enjoy the peace and warm energy around me… This hour with the animals without any outside distraction or stress is so important to bring my mental and emotional health back into alignment. As I sit and be, I am reminded that the animals around me benefit from my love and attention and sometimes they feel down, too. Sharing the moment lifts all spirits.

Avery is smiling because of you. Avery is one of the many people that benefit from the transformative and healing work that Blue Rider’s equines guide. Avery struggles with anxiety, OCD and a learning disability. She came to the barn 1 ½ years ago, an overwhelmed and combative x year old who couldn’t focus for more than a few minutes. She was struggling in school and having meltdowns that were wreaking havoc on her family. During her first lesson, she was able to focus in a way her mom had never seen before. Over the past 1 ½ years, her weekly lessons at Blue Rider have helped her to manage her anxiety and OCD. She is more confident in everything she does. Avery’s mom says, “Every time Avery rides it’s like a switch is flipped.  No matter how out of sorts Avery is, riding always brings back my daughter.”

The journey to Blue Rider began late in life for me. In my mid sixties, widowed and with family far away, I had read that the best way to deal with grief and loneliness was to recapture the part of your childhood that gave you the most pleasure. For me, that was horseback riding. Friends in Virginia where I spent several summers had horses and we would ride daily through fields, creeks and woods. I learned to jump, post and canter simply by watching but never had formal lessons. At age 50 I attempted to correct that and signed up for lessons at a local stable. By then my hearing loss was preventing me from hearing the instructor and her frustration was very evident. I stopped, feeling that this was a sign that my riding days were over.

It has now been two years and I am so grateful that the roads led me there. Christine and Rachel have taught me so much about the rider/horse connection and respect for the horse’s physical and emotional well being as well as my own. As a therapeutic riding stable, they both have such compassion to deal thoughtfully with any disability. I was particularly moved when Christine had a hearing loss professional come and observe our lesson so she could give tips to instructors on how best to communicate to riders with my disability.

Christine’s amazing ability to sense a riders needs, both emotional and physical has been great therapy for me. After my lesson, I tell people that I feel like I have had both yoga, physical therapy, and a riding lesson all rolled into one. Where once I may have seen horses as just the animals I ride, I have learned a new respect for them as well. Blue Rider is truly a holistic approach to riding.

I work as a special needs nanny for James, an almost three year old, who was born prematurely. I first met James in January of 2015. This spirited little guy gave me a huge smile, pointed his finger at me and won my heart. On Oxygen, a G tube for feedings, unable to talk and not yet crawling at almost 24 months, it was clear his journey had been a challenging one. My goal was to be his biggest support as he worked every day on new skills. James approaches each day with joy and purpose. He loves to learn and be challenged. His enthusiasm is like no other. To know James is a true honor.

In the summer of 2009, my daughter, who had also experienced trauma, participated in a program at Blue Rider Stables through the riding stable where she rode at in CT.  I came along to observe. I was taken with the approachability and gentleness of the horses at the stable, along with the expertise of Christine who ran the program.  As I worked with James that first winter I thought of Blue Rider. As opposed to the stable my daughter had ridden, I felt James would be safe, not only physically, but emotionally as well.

Summer time arrived and James’ parents agreed to let me take him to visit the horses. James was fascinated as soon as we entered the barn. Christine put him on a horse and his entire being was infused with joy and determination. He began riding weekly when his health permitted. When I say riding, I do not mean just sitting on a horse. James had to sit tall and straight. With the support of Anna, one of the riding instructors, he had to use his core for balance and his legs for gripping the horse. He started out with little muscle tone and needed a pillow around him support him as he sat., and now 6 months later is sitting with little to no support.  James points which way the horse should go and says “Walk on”. James has a very limited vocabulary due to issues with his vocal cords. He has approximately 20 words he says on a regular basis and very few 2 word phrases.  So with that knowledge, let me tell you, he takes riding very seriously. Full of laughter and babble on the way to the barn and on the return, he is quiet and focused while on the back of a horse.

James has had a major break through EVERY time he has ridden. He was off oxygen for a ride in the car for the first time after a lesson. This is huge as his pulmonologist did not feel he would be off oxygen until he was 5. This was the first step towards showing that he is going to be on “room air”  full time sooner than projected.  He was crawling, with many falls when he started riding, yet within one week, of the first time he rode,he had mastered it. His language has progressed  from saying papa to naming all his favorite people and is using 2 word phrases. He absolutely loves the color purple and says it with fervor.James began to eat by mouth every day with little resistance. I truly cannot express what a gift Blue Rider Stable has been for James.

The respect given and the gentle, firm guidance motivate him in a way that does not happen outside of the stable. The horses, in their gentle, wise and loving ways bring out the very best of James. The team of therapists such as PT. Speech. OT, Developmental Specialist, Trauma and Music,  who work with James all notice and say it is remarkable how far he has come in the last 6 months. They know of his riding and credit much of his progress to Blue Rider.

Tears come to my eyes as I write of James’s experience at Blue Rider Stable. This stable is a unique treasure that I wish were available to all who struggle with physical, emotional or mental health. The day we walked in the barn was the day James embraced his body rather than just accepting it.